I want to share some amazing information. I was invited to attend a reunion of former flight attendants who flew for a charter carrier that was based in Oakland and New York called Trans International Airlines (TIA) (1974 – 1986). A member of our yacht club (Ballena Bay Yacht Club in Alameda) was an FA and invited me to attend the reunion and have a table at which I could display and sell copies of my book, “Never Wait for the Fire Truck”. (I eventually sold 8 copies). Late in the afternoon one of my customers took his copy of my book out to the patio and showed it to some others out there. Someone pointed to the cover photo and asked “Is that Pan Am in Tenerife?” Yes they said. Then this person said that the airline lost a FA in this accident. She was on vacation and was sitting in the upper first class dome. Then someone remembered her name and another person said that she was travelling with another FA and both of them died that Sunday afternoon! I was in shock and amazement! It is indeed a very small world.

My world is indeed getting smaller. A male customer in the thrift store saw my book cover under the glass at the counter. He knew about a boy in high school who lost his parents in the accident in Tenerife. I asked him if he went to Piner High (Santa Rosa) and he replied yes. I was aware of this boy and his brother. Their parents went on the cruise with another couple and they all perished that Sunday afternoon of March 27,1977. However, we could not remember their last name. The customer left the store then returned 5 minutes later. He showed me his phone. He found Gregg Stebben online. He is a radio personality in North Carolina and has written three books about men’s health. Also posted was his Email address. I sent Gregg a message and he responded that night. He DOES want to continue the conversation and we will. He will also forward the information to his brother (I believe Gregg is the younger of the two). Amazing! 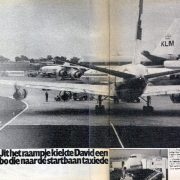 I am a survivor.